Centre of the Cell recently finished hosting a book club for our YMS members. At the end of this we asked our participants to write a book review for a competition. You can find one of our winning submissions below, and another here. 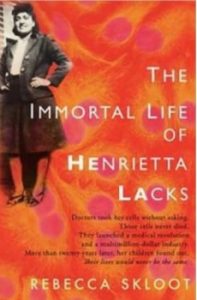 The Immortal Life of Henrietta Lacks is about the woman behind the HeLa cells, her family and what those cells have been used for. Unlike most cells, the cancerous HeLa cells, which were extracted without her knowledge when she was undergoing treatment for cervical cancer, did not die after a limited amount of cycles and instead continued replicating. They were given to many scientists around the world to use for research and experimentation, eventually with a ‘cell factory’ being set up to mass produce them. They played a vital role in trialing the vaccine for Polio and many other diseases, as well as helping to make huge strides in the field of biomedical science. Now, 70 years after her death aged 31 in 1951, they are still widely used.

Going into the book I was interested, having previously enjoyed reading about the contagious cancer found in dogs which originated approximately 11,000 years ago. These cells, fortunately, are not contagious as the very questionable human experiments by Chester Southam beginning in 1954 proved. I had not expected to be quite so alarmed by the poor ethics shown by many of the researchers and doctors. The family of Henrietta, for example, had no clue that her cells were still alive until almost 25 years later when they were asked for DNA samples because it was discovered that the HeLa were contaminating other cultures.

While the book was clearly on the side of the Lacks family, I would not consider it biased. When Southam was injecting the cells into people without their informed consent, the author makes sure to explain the reasoning behind it. He did not do it out of curiosity, but rather a worry that they could cause cancer in the researchers studying them, so while it was a terrible thing to do, he at least did it for a good reason. If Skloot had wanted to, she could have left this part out and we’d have just thought he was an awful person.

Part of what made it so interesting to read was the style of writing. Rather than being a list of facts, there were many detailed descriptions of the people involved and the events. It also included stories from both the family’s and the researcher’s lives before and after the cells were taken, even though these anecdotes were rarely directly related to the cells themselves. This made the people seem more real.

My one issue with the book was the jumping back and forth through time. While there was a timeline at the start of each chapter showing the years it would cover, and most of the time there was a smooth transition, on occasion it would be very abrupt. An example in one of the earlier chapters is when the freshly extracted cells are being put into the incubator. There is a brief line saying that George Gey made it himself and then it suddenly starts talking about his childhood when we were just about to meet the cells for the first time. I almost considered skipping forward but it was only a two page interruption.

The book went far beyond my expectations and I ended up reading it in a single weekend. One fact that really amazed me was the estimate for how much her combined cells would weigh- 50 million metric tons (over 45 billion kg). To put this into perspective, a blue whale, the largest animal to have ever existed, weighs up to 150,000kg, meaning that her cells weigh more than 300,000 blue whales. Their population is between 10,000-25,000 individuals so the small sample of cells taken from one 5ft tall woman are now at least over 12 times the weight of the entire blue whale population combined!

Due to some more mature content, I wouldn’t recommend it for children or young teenagers, however I would whole-heartedly suggest it to anyone above that age range with even the slightest interest in science.