A day in the life of a virus

Viruses are tiny organisms (microorganisms) that contain a strand of genetic material that is surrounded by a coat of proteins known as a ‘capsid’. They can’t make copies of themselves, so they have to infect other living things to survive.

How do viruses enter our bodies?

Viruses start their journey by infecting another living being such as humans. They can enter our bodies through our mouths, noses or cuts on our skin!

What do viruses do when they enter our bodies?

They find a cell in our bodies to attach to and get swallowed. The genetic material of this virus hijacks the machinery in our cells that is responsible for making brand new cells. When this happens, our human cells are forced to produce brand new copies of the virus. Eventually, enough copies are made and they manage to escape and kill the cell they invaded in the first place! 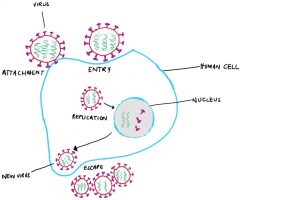 So…why do viruses make us sick?

These new copies of the virus travel around our body and infect multiple cells at the same time. Too many cells become invaded and are either damaged or destroyed as a result. This is what makes us feel ill. Our bodies try to fight the invaders in a number of ways such as raising our core temperature which is why sometimes we get a fever to kill the virus. Different viruses will affect different areas of our bodies and will cause symptoms specific to that area. For example, the rhinovirus which is the type of virus that causes the common cold is usually found in the upper airways and can cause snot, sneezing and coughing. COVID19, a type of coronavirus, affects the lower airways and tends to affect the lungs which can also cause coughing and difficulty breathing. Hepatitis is another type of virus and will usually affect the liver causing problems such as an enlarged liver, tummy ache and yellowing of the skin.

How do our bodies fight viruses?

In response to this our bodies recruit immune cells like T cells and B cells to fight the virus. T cells are responsible for killing the virus and are also sometimes known as ‘T-killer cells’. B cells are responsible for producing special proteins called ‘antibodies’ that can attach to the virus and eliminate it. They also form ‘memory’ cells which remember the virus if it infects you for a again; memory cells can help activate the immune system and get rid of the virus faster the second time around. 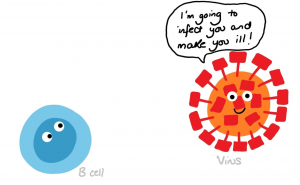 Are there any treatments for viral infections?

How long a viral infection lasts really depends on the type of virus that has entered the body with some infections lasting from days to months.Our bodies are pretty good at dealing with viral infections all on their own and many times, viral infections are left to run their course! Symptoms such as headaches from a cold or flu will usually be managed with simple medication easily bought over the counter. Some viruses do have specific medication to treat them known as ‘antivirals’ which require specialist doctors to prescribe them and often involve hospital admission. Contrary to what many people believe, antibiotics don’t treat viral infections at all! Antibiotics are usually specific to bacteria which is a different type of microorganism and viruses remain unaffected with these medicines.