Centre of the Cell > Blog > Science Questions > Are antivirals smarter than viruses?

Are antivirals smarter than viruses?

The ultimate test of intelligence comes – drumroll – at the end. Before that comes an interview for each of our contestants: viruses, antiviral drugs, and the human immune system.

First up, it’s the VIRUSES…

Well, that interview went terribly. It would have been much more useful to ask about the seven stages of the viral life cycle. First, the virus enters the human cell. Each virus has its very own cell of preference, for example, the HIV AIDS virus infects immune cells (T-helper-lymphocytes) and COVID-19 infects lung cells. Inside the cell, the virus gets naked. In the Queen’s English, the virus takes off its protein coat to expose its genome. At this point, different viruses do stuff differently, but the overall aim is the same. Human cells – unlike viruses – contain ribosomes that can translate genes into proteins. For a virus, the privilege of using a human ribosome is a once-in-a-lifetime opportunity. The virus uses the ribosome to make proteins which make new viruses, which then exit the human cell.

So that, for a virus, is the meaning of life.

And next up, it’s the IMMUNE SYSTEM… 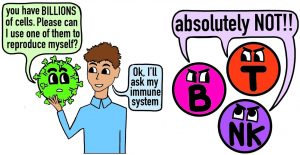 Well, if I was a virus, I’d definitely want an explanation for this remarkable inhospitality. So here it is.

From a single cell’s point of view, viral invasion is a catastrophic disaster. Human cells need to continuously create proteins in order to carry out their normal functions, and this can’t happen if the virus is hogging all the ribosomes. Worse still, once the invading virus has reproduced inside a human cell, the baby viruses burst out with such explosive newborn energy that the human cell usually dies!

So what do killer-T-cells in the immune system do about this?

They identify and kill human cells that are infected by viruses. The image below shows how.

So clearly, the immune system is clever, even if it must be cruel to be kind. Other immune cells called B-cells and Natural Killer cells also help the killer-T-cells. However, the immune system sometimes needs even more extra support to fight viruses.

And that’s why we have the ANTIVIRALS… 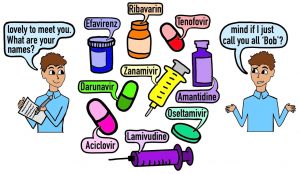 Despite their hideously unpronounceable names, many antiviral medications have similar actions.

The other antivirals block the virus’s enzymes (useful proteins that help the virus to carry out necessary chemical reactions in its life cycle). For example, Amantidine blocks viruses from removing their protein coats inside human cells. For another example, Oseltamivir stops newborn viruses escaping from cells to infect other cells.

And finally, who’s the smartest?

Intelligence – for this article – is the ability to learn, then remember what you learnt and then apply it to your situation.

Viruses are semi-intelligent because they can mutate. This means altering their genes to make slightly different proteins, which enable them to survive better. The flu virus is a very intelligent virus because it mutates every year. This means that the antiviral drugs and vaccinations used against it last year don’t know what to expect when fighting it this year.

No offence intended, but Antivirals are completely dumb. Admittedly, they don’t have brains or genes – which is a legitimate excuse for not being brainy geniuses.

Hence, we are left with our winner: the human immune system!

The immune system learns which viruses are in the body because killer T-cells scout out human cells that are making strange proteins. The immune system applies this knowledge, because killer T-cells divide into many more identical cells before starting the actual killing process. Therefore, more killing can be done at a time, eradicating viruses faster. The immune system remembers which viruses it encountered because each killer T-cell is designed for a different virus. After a killer T-cell fights a virus, it gets slightly more big-headed, and increases its ability to survive. It also stays in the place where it found the virus (eg lungs or liver) instead of moving around the bloodstream with the rest of the immune cells. These super-big-headed long-lasting previously-used killer T-cells are called memory cells. 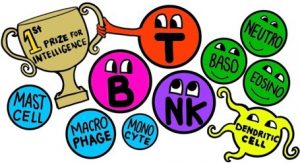 As you can see from the image above, the immune system is HUGE: each type of cell – B-cells, T-cells, monocytes, macrophages, mast cells, neutrophils, eosinophils, basophils and dendritic cells – does a different thing. This article only talked about how killer T-cells fight viruses. There is so much more to learn about the immune system – good luck on your quest to find it all out!