Your body is made up of trillions of cells. That’s a LOT of cells. There are so many cells in your body that it doesn’t really matter very much when some cells eventually stop working or die. In fact, it’s part of the natural process of living that many of your cells will wear out after they’ve done their job for a while, and new cells will be made to replace them. This way, you constantly keep your body’s supply of cells fresh and healthy. But have you ever wondered… can cells live forever? To explore this question, we’ll need to think deeper about what a cell lifespan really is.

The Lifespan of Common Cells

If we want to pick one single cell out and wonder about its lifespan, an important thing to know is what type of cell it is. If it’s a red blood cell for example, it will live roughly 90 days before it dies from wear and tear in the body. If we take it out of the body, it will die even sooner! This is because our body is the right environment for a red blood cell to live in – it’s the right temperature and contains all the right nutrients. This is the same for all other cells too (they just love being in the body).

A neuron or nerve cell on the other hand, might live as long as you do – hopefully a hundred years or more! This is because all your nerves are extremely important, and your body is very good at taking care of them. Contrary to popular belief, you can actually grow new nerve cells sometimes, but this is very rare. For the most part, you have the same old nerves you’ve always had.

Neutrophils (a type of white blood cell) have the shortest lifespan of any cell in your body, living for about 4 hours only. The job of a neutrophil is so hazardous (fighting germs) that your body has become really good at making new ones, so you’re making them all the time!

But wait a minute, what happens when a cell divides? Does this count as two new cells, two old cells or one new and one old? This is an unanswerable question, because it’s kind of all three at once! If this is making your head spin, why don’t we change the question a little… what about cell lines or families of cells? How long can these live? Surely a line of identical neutrophils being made one after the other will live longer than a single neutrophil, for instance. Let’s see.

What is the Hayflick Limit?

If a cell could divide over and over and over again an infinite number of times, you might say that this cell could live forever in future generations of the same cell, even if some of the cells do die eventually. Is this the case inside our body? For the most part, no. In 1961, a man named Leonard Hayflick discovered that if you took a cell and made it 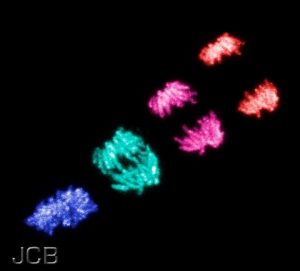 divide over and over again, eventually it would stop dividing for good. This means that there’s a limit to the amount of times a cell can divide, and this was named the Hayflick limit. The Hayflick limit is between 40 and 60 cell divisions for most human cells. This happens because of a special part of your DNA called telomeres. Telomeres get worn down with every cell division, until they’re eventually used up. When a cell loses its telomeres, it can no longer divide.

There is an exception to the Hayflick limit, however! Stem cells in your body use an enzyme called telomerase to rebuild their telomeres, allowing them to divide an infinite number of times. Because of this, stem cell lines can live as long as you do!

What is the Oldest Cell?

In my book, there are two contestants for the longest line of cells, and thus the oldest cell. The first is a line of cells called HeLa cells, named after Henrietta Lacks, from whom the cells were taken originally. Henrietta Lacks had cervical cancer from which she sadly died. Like stem cells, cancer cells also use telomerase to get around the Hayflick limit. After she died, scientists continued to grow a small number of Henrietta’s cancer cells in special conditions in the lab. Years passed, and somehow this line of cells became popular with scientists. Today HeLa cells are used in labs all over the world for the good of cancer research. This line of cells is 71 years old! Perhaps this is the oldest culture of cells, but it’s certainly not the oldest cell line… yet, anyway.

The other contestant is far older. When you think about it, all of your cells came from a single stem cell at the beginning of your life. But that stem cell itself came from two cells – one from your mum and one from your dad. Trace back those cells and they go back to their parents… and grandparents… and great-grandparents… and so on and so on until we’re tracing back the history of life itself! And that’s pretty much what life is: the history of cells. The oldest line of cells, therefore, is every single cell in the world, which probably all came from one cell. This line of cells is about 3.5 billion years old. Wow. That’s an amazing thought, isn’t it? All the cells in your own body come from a family which goes back billions of years. Maybe cells can live forever after all.