Centre of the Cell > Blog > Science Questions > Can you make your brain explode?

Can you make your brain explode?

So it’s bonfire night – where we celebrate the failure of a grand plan by Guy Fawkes to blow up the Houses of Parliament using gunpowder in 1605.

However, it’s not just the Houses of Parliament at risk of an explosion…

The most explosive experience that your brain can have is called ‘Excitotoxicity’.

Unlike fires, which require Oxygen to get started, excitotoxicity starts when parts of the brain run out of Oxygen.

Just like fire, excitotoxicity spreads rapidly, and is very dangerous if not stopped (a fire must be deprived of oxygen, a brain must have its oxygen supply restored).

Before we explain excitotoxicity, let’s introduce some key characters:

Neurons: cells in the brain that send and receive electrical signals, to coordinate human thoughts, sensations and actions.

Neurotransmitters: chemicals that are stored inside neurons and released in order to make surrounding neurons send signals.

Sodium channels: proteins on the surface of neuron cell membranes which can change shape to develop a hole which lets sodium ions into the neuron.

ATP-ase pumps: proteins on the surface of neuron cell membranes which use ATP (a form of chemical energy) to force sodium out of neurons.

Now we are ready to understand how healthy neurons send signals: 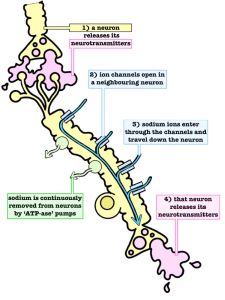 Look at the image above. Big blue arrows (for sodium entry) happen if the nerve is sending lots of signals. Small green arrows (for sodium exit) happen if the nerve does not have enough oxygen. Imagine what would happen if a neuron’s blue arrows were much bigger than its green arrows. The neuron would fill up with sodium and water until it exploded like an overinflated water-balloon, sploshing its contents – including neurotransmitters – out into the surrounding space. These neurotransmitters cause surrounding neurons to send loads of signals, giving them much bigger blue arrows than green arrows. Those neurons also burst and splosh out even more neurotransmitters, causing even more nerves to send more signals than they can cope with.

Excitotoxicity – illustrated below here – starts when one neuron has a ‘small green arrow’. 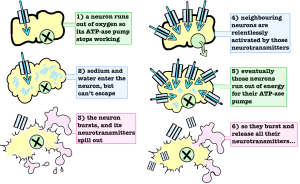 There are two main reasons that Excitotoxicity is particularly dangerous and these are in fact shared with fires and pandemics:

1) The rate of growth increases over time.

2) It probably won’t stop by itself.

Both effects happen because the nerves killed by excitotoxicity or the parts of parliament engulfed by fire or the people with a very contagious disease will spread excitotoxicity or fire or disease to all neighbouring neurons or parts of parliament or people susceptible to the disease. So the fire or pandemic or damaged section of brain will grow faster as it gets bigger. 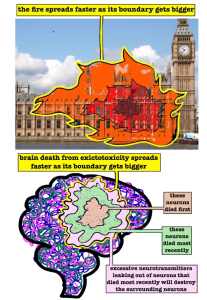 That brings us to the end of the article, though there are of course many more questions to ask.

These will be answered in future articles, so keep watching the blog!

Meanwhile, I hope that your brains have a very happy bonfire night filled with fireworks but no explosions…