Centre of the Cell > Blog > Science Questions > How do cells wrap presents?

How do cells wrap presents?

Last year, I used cellular wrapping paper (the same material that makes cell membranes) for all of my family’s Christmas presents and they were delighted. This article spills some cellular-present-wrapping secrets and explains why cells wrap presents.

How do cells make wrapping paper?

Cellular wrapping paper is made up of lots of little individual units called phospholipids that look like lollypops (blobs with sticks on the end). If you were to pour a load of these lollypops into a jug of water, you would see something mega cool: the lollypops would naturally arrange themselves into a hollow sphere with blobs on the outside. Sometimes, this hollow sphere has two concentric lollypop layers, with blobs on the inside of the inner layer. This happens if the sphere has water inside it.

Why do Phospholipids make these spheres? 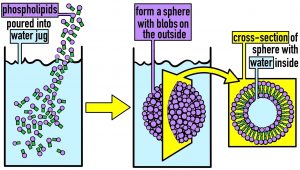 Why do blobs love water?

Understanding this requires knowledge of three types of chemical bond, shown in the image below. Chemical bonds are made when electrons from one atom get attracted to another atom, forcing the atoms to stick together, making a molecule. The bonding electrons hover in between the atoms that attract them. 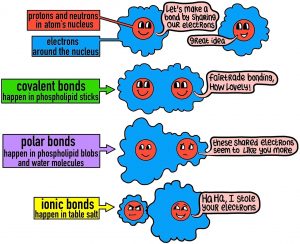 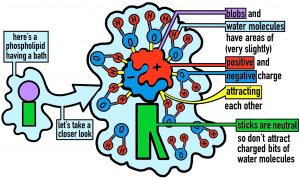 Why do blobs have polar bonds?

Polar bonds are made if one atom in a bond is more attractive to bonding electrons than the other atom, but not quite attractive enough to steal the electrons, which happens in ionic bonds. Attractive atoms have lots of protons in their nuclei, and their surrounding non-bonding electrons don’t take up too much space.

And finally, why do cells wrap presents?

Cells wrap presents for the same reasons as humans – you want to give something to someone else without accidentally using it yourself beforehand! The main presents that cells wrap are hormones and neurotransmitters. The wrapped parcels are stored next to the cell membrane, and when the cell receives an appropriate signal, it releases the presents into the surrounding space. Wrapped presents are called vesicles and the releasing process is called exocytosis.

Have a very merry Christmas or anything else you celebrate!

I will leave you with a final picture of what Santa got in his Christmas stocking this year. 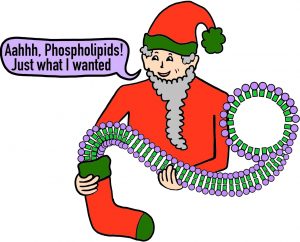