Centre of the Cell > Blog > Science Questions > How does the liver work?

How does the liver work?

The liver is a machine 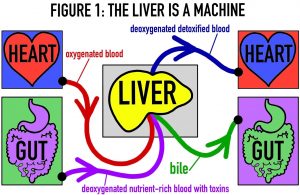 Hepatocytes (Latin for ‘liver cells’) take chemicals from the input blood and perform many chemical reactions. If the products of those reactions are ‘useful’, they travel into the vena cava for circulation round the body; ‘waste’ products travel into the bile ducts for excretion out of the digestive tract into the toilet. Hepatocytes have many unique enzymes which help to perform these reactions. Enzymes are chemicals in the body which help to speed up reactions.

What sort of useful products and waste products?

That is best summarised in figure 2 which shows some examples. Useful products include clotting factors, lipoproteins and hormones. Waste products that go into the bile include salts and spare cholestrol (a type of fat). Some waste products such as urea are created by the liver, but they stay in the blood until they are excreted into the urine. 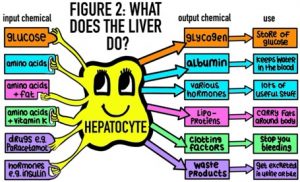 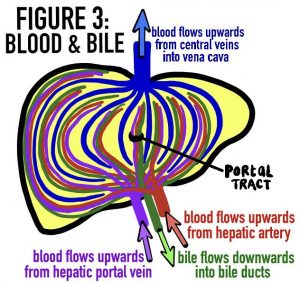 Please read the four key points below and then decide whether you agree.

2. Branches of the hepatic artery, hepatic portal vein and bile duct travel next to each other in groups called portal tracts. There are zillions of branches and many are thinner than hairs.

3. Central veins (see figure 3) are equally spaced in-between the portal tracts. However, there are many more portal tracts than central veins: if I were to take a 2D horizontal slice of my liver and look at it from above (with a microscope), I would see hexagons whose corners had portal tracts, and whose centres had central veins. This is exactly what you will see in figure 4!

Here is a maths question especially for you:

Look at the grey square with lots of yellow hexagons in figure 4.

What is the ratio of number of portal tracts to number of central veins?

Does that ratio depend on the how many yellow hexagons are there?

4. All the fun happens in the spaces between central veins and portal tracts. The shape of these spaces are hexagonal prisms, as shown above in figure 4.

What actually happens in the hexagons? Did someone say fun? 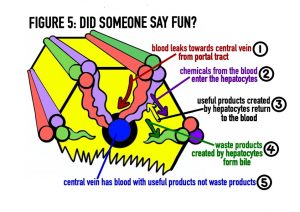 Can the liver actually regenerate itself?

Yes. Stem cells hang around in-between bunches of hepatocytes. If the hepatocytes get damaged and die, the stem cells notice and divide. Half of the newly divided stem cells turn into hepatocytes themselves. The other half stay as stem cells for next time. Most other organs can’t regenerate because they do not have these stem cells.

Thank you for reading and I hope that you liver happily ever after.