Centre of the Cell > Blog > Science Questions > How many senses do we have?

How many senses do we have?

Well, the famous five senses are touching, tasting, hearing, seeing and smelling. These are aspects of our external environment which can be transmitted to our brains via sensory nerves.

Some sensations are not exclusively due to touching, tasting, hearing, seeing, or smelling – for example feeling sleepy or short of breath.

I think that there must be more than 5 senses.

That’s because we (well… our cells) have internal senses too

A sense enables me to realise that something is there, so that I can respond to it. If I was a human body cell, this something could be a hormone in the extracellular fluid surrounding me (e.g. insulin or oestrogen) or a product of my metabolism (e.g. ATP or lactic acid) building up in my cytoplasm.

A sensor is what I use to detect what I sense. If I was a human body cell, my sensors would be called ‘receptors’: proteins that change shape in order to perform a necessary function, as a result of encountering whatever is being sensed.

That is best explained in the following flowchart. 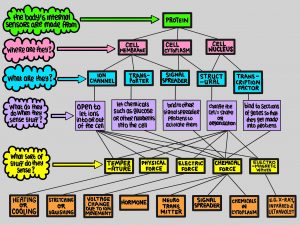 My favourite thing about this flowchart is that it provides a framework for most of the stuff that happens in the human body. Here are some examples. All of the words in bold can be found in the flow chart!

There are signal spreader proteins on the cell membranes of immune cells which recognise chemical forces from pathogens such as bacteria or viruses. This activates transcription factors in the nucleus, which cause the immune cell to create proteins called inflammatory cytokines which make you feel ill.

“Excuse me, Anoushka, the question was ‘how many senses do we have?’

Well, the fifth row of my flowchart says that we have five senses: we can sense temperatures, mechanical forces, electric fields, molecular environments and electromagnetic waves.

However, a physicist would argue that we only have three senses. This is because electric fields, molecular environments and electromagnetic radiation are really all the same thing – for two reasons. Firstly, Atoms, molecules and ions exert electrically attractive and repulsive forces on each other via their protons and electrons. That’s why chemical reactions happen. Secondly, electric fields and magnetic fields always create each other whenever their field strengths are changing with time. So every time an electron moves around an atom (changing the electric field around the atom), a very tiny magnetic field is actually created too!

Very strange, I know, but I suggest that you ask Mr Hertz, Mr Maxwell or Mr Faraday if you would like a better explanation.

I hope that you enjoyed this article. As a special thank you for reading it, I will let you choose how many senses you would like: 3, 5 or 10,000!