First, we explain visual processing. Then, we explore optical illusions.

Visual Processing – how do we see images when all we get is light? See the image below to find out!

There are over 150 million neurons involved in visual processing. Neurons near the retina send signals based on simple patterns (e.g. plain colours/stripes/spots), and neurons further behind send signals if they received signals from neurons in front. Therefore, the ‘behind’ neurons see combinations of simple patterns otherwise known as whole images (e.g. cats/tomatoes/people/words/cubes). Each ‘behind’ neuron is connected to a unique combination of ‘in-front’ neurons.

Optical illusions make our brains get simultaneous signals from neurons that represent different images. Seeing two possible images while looking at one thing is very strange for our brains. There are three types of optical illusion that I would like to show you.

There are many more exciting ambiguous objects to search for on the internet, for example pictures that could be both young and old people, or ducks that could also be rabbits!

In these illusions, we are seeing 3D images that could not exist in real life. Why? Because when we see certain patterns drawn on 2D paper, we assume that they represent 3D things – as opposed to just being random lines on a piece of paper. This is probably something that we have learned to do from looking at lots of photographs of 3D objects on 2D paper!

Do you think that you could create your own three-dimensional contradictions? Start by drawing three-dimensional shapes on a piece of paper and then join them together in a way that is impossible in 3D, but can be done on paper. Here’s what I came up with. 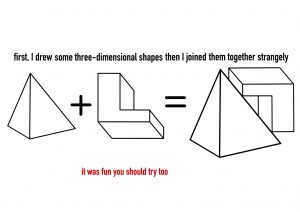 It was fun, you should try.

Type 3 Optical illusions: those that move

People don’t always see them moving, and I didn’t draw the one below, but to many of us it looks as if it is spinning. 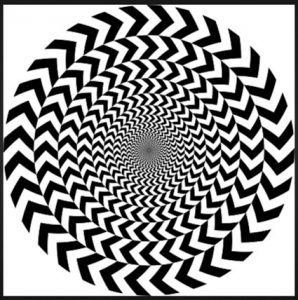 But why is it spinning? There are three parts to this answer.

Part 1: how do we watch things move?

Our eyes see lots of still images in very quick succession. It’s similar to how video cameras create videos by taking continuous photos really quickly and showing them to you one at a time – again, really quickly.

Part 2: what are saccades?

They are mega-fast tiny vibrations that our eyes do continuously when we are awake and occasionally when we are asleep. Saccades mean that light from each point of an image will continuously hit different parts of the retina – and therefore get sensed by different neurons. But why are saccades useful?

If a neuron is exposed to the same stimulus – e.g. a ray of light – for a long time, the neuron gets bored and starts ignoring the stimulus. In science-language, ‘the neuron becomes desensitised’. Saccades stop neurons getting desensitised.

Part 3: so why is it spinning?

“and now my head is spinning”

…and it’s also the end of this article. Thank you for reading! I hope that you are looking forward to making your own three-dimensional contradictions once your head has stopped spinning.