Centre of the Cell > Blog > Science Questions > What are the ethical considerations for CRISPR and gene editing technology?

What are the ethical considerations for CRISPR and gene editing technology?

Check out our article on what gene editing and CRISPR are; in this piece we will be exploring some of the issues surrounding these technologies.

As with all new technologies that have potential to have such big impacts on humans, it is important to consider the ethics; whether it is morally right to use this technology in a variety of different circumstances. 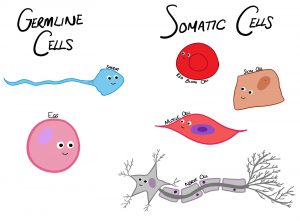 Gene editing can be done on any cell in the human body. The cells in your body can be categorised into 2 groups: somatic and germline. Germline cells are cells that contain DNA which will be passed onto the next generation: eggs or sperm. Somatic cells are the rest of your body cells that will not be passed on to any of your future children. Using gene editing in somatic cells is generally agreed to be a positive thing, as it can cure a disease for an individual. This is what the licensed gene editing therapies do. 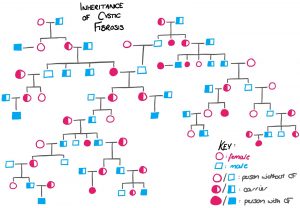 However, if someone has a genetic disease that can be passed on, you could edit their germline cells to prevent them passing the condition on to any future children. See this diagram showing the inheritance of cystic fibrosis. The inheritance pattern is autosomal recessive, meaning that you need one copy of the faulty gene from each parent to have the disease. If you have only one copy, you are a carrier and will not have any symptoms, and likely unaware that you could be a carrier unless someone in your family has cystic fibrosis. Cystic fibrosis is a single gene disorder which affects a protein, causing the airway to fill with thick and sticky mucus which makes it hard to breathe. It also affects many other systems, including the digestive tract. This condition may be cured by gene editing in the future.

Although ensuring a disease is not passed onto future generations sounds beneficial, this technology is new. Until further research can be done, we do not know about the long-lasting effects or if it has any unintended consequences. You would be modifying the genome of not just one person but many future generations. There is also the issue that you cannot obtain consent from someone who is not born yet, as it is their DNA that is being altered. The counter argument however is that it is unethical not to use a technology to cure life limiting diseases such as cystic fibrosis. Eliminating diseases that severely affect the quality of a person’s life from the gene pool is a compelling argument to use gene editing on germline cells, once the technology has been rigorously tested and proven. 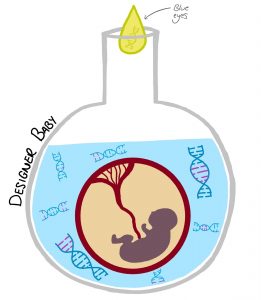 Many people are quite worried about using gene editing for non-therapeutic purposes in germline cells; to alter the DNA of a person to change normal human characteristics, for example eye colour or intelligence. You might have heard of ‘designer babies’; a concept where the parents can determine the characteristics of their unborn child through gene editing, choosing their height for example. This is likely quite far away in terms of what is possible, as for many superficial or physical traits, it is not known exactly what genes are responsible so it would not be possible to choose these characteristics. However, it is not outside the realms of possibility that in the future, parents wishing to gene edit their embryos to avoid a genetic disease may also want to choose the colour hair of their future child, or give them a faster metabolism. Gene editing opens up the possibility of slowly modifying the gene pool for the whole of humanity; a huge and irreversible change.

Germline cell editing and genome editing in embryos is currently illegal in many countries including Australia, Canada and Europe, due to some of these ethical concerns. However, in China there are only guidelines against it. Reports emerged from China in 2018 of twin girls born whose embryos had been gene edited. The scientist claimed to have disabled the CCR5 gene which enables HIV to enter cells; by doing this he may have helped protect the girls against HIV. However, he faced worldwide backlash and was fired for failing to follow procedures and do adequate safety testing. Read more about this case here.

Another concern is access to this technology. Will it be widely available so that anyone can buy a kit and do some genetic modification on themselves or their pet? Or will it be tightly regulated with only a select few having access? There are problems with both scenarios. The general consensus is that everyone should have access to the life-changing disease-eradicating CRISPR therapies. These new therapies coming to market can be extremely expensive. Rules and regulations will be needed to ensure that those who need access have it and to avoid further widening already existing health inequalities.