Alzheimer’s disease causes a number of changes in a person, caused by the physical changes in the brain. It is a progressive disease – affecting more and more of the brain over time. The first sign of Alzheimer’s disease is usually problems with memory – losing items around the house or forgetting people’s names for example. 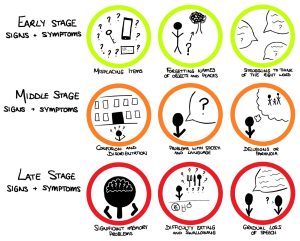 What happens in the brain in Alzheimer’s Disease?

The brain of a person with Alzheimer’s disease looks different to the brain of a person who does not have Alzheimer’s disease. The disease begins in the brain long before the person affected or the people around them notice any symptoms. This is called the prodromal phase, where the disease process is happening in the brain but there are no signs of it, and it is usually only identified in a research setting. The two main processes which scientists have identified in the brain of people with Alzheimer’s are the formation of plaques and tangles. The plaques and tangles accumulate in the brain and stop the nerves from working properly. They spread throughout the brain, affecting more and more areas, leading to the symptoms of the affected person to get worse. 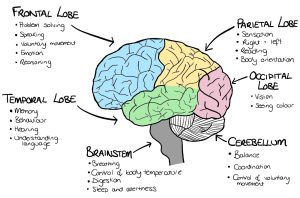 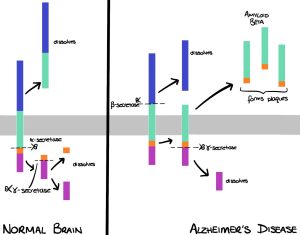 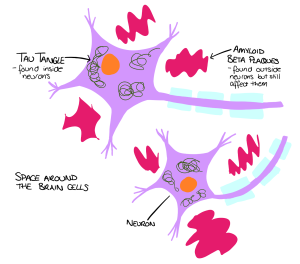 Both plaques and tangles are toxic to the brain cells, causing them to die. Without the nerve cells and other supporting cells in the brain, we lose some of our functions, depending on which area of the brain is affected.

What are the causes of Alzheimer’s Disease?

Some genes are associated with Alzheimer’s disease. A gene called APOE can have a role which contains instructions for a protein that helps to carry cholesterol around the body. APOE2 is thought to have a protective effect against Alzheimer’s, whereas APOE4 increases a person’s risk of getting Alzheimer’s. Most people have APOE3 which neither increases nor decreases your risk. None of these genes means you will or won’t get Alzheimer’s, but they contribute to the chance a person will or will not develop Alzheimer’s. 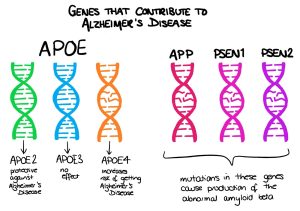 The causes of Alzheimer’s aren’t fully understood, but it is thought to be a combination of environmental factors and genes. Although there is not yet a cure for Alzheimer’s disease, there are some treatments which help those affected. Some drugs are available which help people with Alzheimer’s continue to be able to do their daily activities for longer and make some symptoms better. Other therapies such as art, music, and physical therapy can help people with Alzheimer’s disease to live a better quality of life. Scientists continue to work to learn more about what causes Alzheimer’s and to find more effective treatments and eventually, a cure.