Centre of the Cell > Blog > Science Questions > What do you hear through a stethoscope?

What do you hear through a stethoscope? 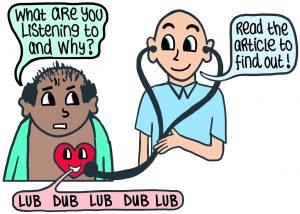 There is only one thing to remember in this article, and here it is: sound happens when things hit other things and louder sounds occur with harder hitting.

When listening to the heart, there are two examples of “things hitting other things”:

1) Heart valve leaflets clap together as the valve closes. This is normal. It is why you can hear your ‘heartbeat’.

2) Blood cells hit each other if there is ‘turbulent flow’ – i.e. if different areas of blood are travelling in opposite directions. This indicates faulty heart valves. 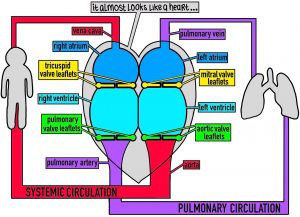 On the image above, trace the path of blood flow from the left ventricle, into the aorta, and all the way around the circulatory system back to the left ventricle. This means passing through all four heart valves – aortic, tricuspid, pulmonary, mitral, then back to the start! The mitral and tricuspid valves are called atrioventricular (AV) valves because they separate atria and ventricles. The pulmonary and aortic valves are called semilunar (SL) valves because they supposedly look like half-moons!

Did you know that your heartbeat sounds are made by your heart valves? 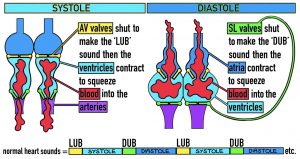 As shown on the image, heartbeats are divided into two stages: systole (where the ventricles contract and push blood from the heart into the arteries and the atria relax to let blood into the heart from the veins), and diastole (where the atria contract to push blood into the ventricles, which are relaxing). The valve ‘behind’ each chamber (atrium or ventricle) will close – making a heartbeat noise – and then the chamber contracts to push blood through the open valve infront. The AV valves are behind the ventricles and the SL valves are (kind of) behind the atria. Murmurs heard through the stethoscope in-between heartbeats could represent one of the valve diseases explained below. 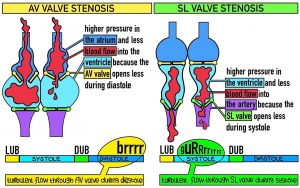 AV valve stenosis causes a ‘late-diastolic murmur’, shown on the diagram by the ‘brrrr’ sound. This is because as diastole nears its end, the ventricle is already quite full of blood so the pressure difference between the ventricles and the atria decreases. Therefore, the force pushing blood into the ventricles from the atria also decreases. The blood does not flow forcefully enough to get through the stiff AV valve, and some blood is ‘reflected’ backwards into the atrium, while other blood passes forwards into the ventricle. Therefore, at the end of diastole, turbulence occurs because different bits of blood in the atrium are flowing in different directions hence blood cells hit each other, making a sound.

SL valve stenosis causes an ‘ejection systolic murmur’, shown by the ‘gURrrrr’ sound. It is loudest at the beginning of systole, when the SL valve hasn’t opened properly, and therefore exerts most force pushing blood backwards. 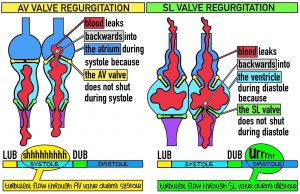 AV valve regurgitation creates a ‘pansystolic’ murmur, shown on the diagram by the ‘shhhhh’ sound which continues at the same loudness throughout systole. That’s because a constant amount of blood flows backwards into the atrium from the ventricle.

SL valve regurgitation creates an ‘early diastolic’ murmur, shown by the ‘URrrr’ sound. It’s loudest at the beginning of diastole because that’s when the ventricles have the smallest amount of blood (and therefore lowest pressure) in them compared to the arteries in front of them. Therefore, the force pushing blood from arteries back into ventricles is biggest at the beginning of diastole. A healthy, non-regurgitating SL valve would prevent blood from moving in the direction of this force.

And here’s the final picture.

As you may have noticed, this article is organised in terms of regurgitation and stenosis for AV valves and SL valves. But how can you tell which of the AV valves (mitral or tricuspid), or which of the SL valves (aortic or pulmonary) are causing a murmur? The answer is that it depends where on the chest you place the stethoscope. A diseased heart valve will cause a murmur in the blood vessels or heart chamber nearest to it. This final image shows where on the chest the stethoscope should be placed to hear murmurs due to each of the four heart valves. ‘Intercostal space’ means ‘hole in-between two ribs’; the ‘sternum’ is a bone at the front-middle of your ribcage; the ‘mid-clavicular line’ means ‘vertically above or below your nipple on the front of your chest’. 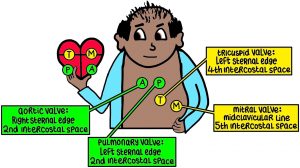