Centre of the Cell > Blog > Science Questions > What is gene editing and CRISPR technology?

What is gene editing and CRISPR technology?

What is gene editing?

Before we talk about gene editing, it is important to understand what genes are. A gene is made of DNA and it codes for a particular characteristic, how to make a particular protein for example. Proteins are like the building blocks of our bodies, and there are many different types to make the different parts of us. Humans have between 20,000 and 25,000 genes! All of these genes together are called the genome. Every person has 2 copies of each gene – one from each parent.

Your genome is essentially an instruction booklet for how to make you! The genes are like the chapters of the book on different parts of you, and DNA is the language that the book is written in. Gene editing involves adding, removing or modifying DNA in a living organism and can target a specific part of the genome. 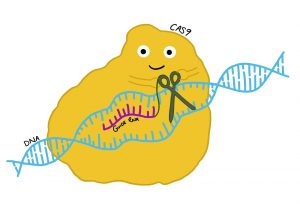 There are other types of gene editing technology, but CRISPR-Cas9 has received a lot of attention as it is faster, cheaper and more accurate and efficient than other methods. CRISPR is actually found in bacteria, which use it to fight viruses. Once a bacterium survives an attack by a virus, they save a bit of its DNA in their DNA archive called CRISPR. When the same virus attacks again, a protein called Cas9 scans the DNA archive for a bit of DNA that matches the virus’. Then Cas9 chops up the DNA of the virus, causing it to die and helping the bacterium avoid death itself. Cas9 is not the only enzyme that can be used to snip the DNA but it is very accurate and most commonly used by scientists. In 2012, teams in America and Europe discovered that the CRISPR system is programmable and could be used to edit genes.

What is it used for? 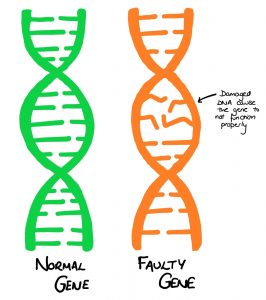 Currently, CRISPR is not widely used to treat diseases, but gene editing technology has a large potential to do so in the future. At the moment, CRISPR is most commonly used to disable genes, as making a cut in it usually means the gene can no longer function. It can also be used to replace faulty genes altogether but this is more difficult.

CRISPR could one day be used to cure many single-gene genetic disorders, with research ongoing. There are over 3,000 of these conditions, such as cystic fibrosis, that are caused by one change to the DNA in one gene. In the US, Luxturna is licensed for a group of conditions caused by a specific genetic mutation that results in the patient eventually going blind. It is injected directly into the back of the eye. Kymriah, a gene editing therapy which modifies the patient’s own immune cells is licensed in Europe and the USA for children and young adults with a specific type of blood cancer. These two are part of just a handful of gene editing therapies that are currently approved for use, with more expected to reach the market in the next few years.

There is also hope that CRISPR technology might be able to treat more complex conditions such as cancer, by modifying the body’s immune cells to be better at fighting cancer. There have already been trials using CRISPR to remove HIV from cells that were successful when combined with the usual drugs to treat HIV in mice. Read more about it here.