Centre of the Cell > Blog > Science Questions > Why am I terrified of my pancreas?

Why am I terrified of my pancreas?

I am terrified of my pancreas because it could digest me.

Let me tell you a story about normality.

Introduction: A person eats some food containing protein, carbohydrate and fat. The food is swallowed down the oesophagus, bathed in acid by the stomach, and squeezed into the small intestine, which is right next to the pancreas.

Problem: Protein, carbohydrate and fat molecules from food need to get out of the intestine into the bloodstream but they can’t because they are too big.

There are lots of tiny blood vessels surrounding the small intestine. Amino acids, sugars, fatty acids, triglycerides and vitamins from food get into the bloodstream because they are small enough to slip through the walls of both the small intestine and the tiny blood vessels. Cells in every organ of the body take nutrients directly from the blood in order to build vital molecules for structure and function.

So why am I terrified of my pancreas?

There isn’t a single atom in my body that I didn’t eat at some point during my life. This means that I am a mere recombination of sugars, amino acids, glycerol, fatty acids, and a tiny selection of other elements, that once lived in the kitchen fridge. Furthermore, the chemical bonds in my body’s molecules are fairly similar to those in food. Therefore, if the pancreatic enzymes can digest what I ate, they should be able to digest me too.

Do pancreases usually digest their owners?

But there is a but…

What if the pancreas becomes infected and inflamed, gets ruptured or bruised, or develops cancer? Pancreas cells would get harmed. Could the contents of their vesicles therefore leak around the body? Yes. Would this really digest nearby body tissue? In severe cases, yes. What would this actually look like? Black gunky yuck called necrosis, which is a scientific term for unintended cell death.

So what can the doctors do?

Surgically remove the gunky yuck, give some emergency drugs, keep the patient in hospital.

This is easier said than done for two main reasons. Firstly, no-one comes to A and E saying ‘my pancreas hurts’; most patients describe very bad tummy pain. Therefore, doctors must give patients blood tests and medical imaging using X-rays or Ultrasound scanners before identifying pancreas problems. Secondly, the pancreas is buried deep in the middle of the body: it’s behind the stomach, in front of the kidneys and backbone, above the large intestine, and below the liver. Performing a surgical necrosectomy (removing the black gunky yuck around the pancreas) means that surgical tools need to reach the pancreas.

What sort of surgical tools and how do they get to the pancreas?

The answer to this question can be found in my next article called “Excuse me, my pancreas is digesting itself, please can you help?”. Until then, I will leave you with an image: it is important to understand some anatomy before reading about surgery. Personally, I find that the best way of knowing what’s where in the body is to imagine where it is inside me – kind of like wearing a 3D t-shirt. 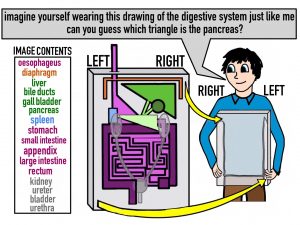