Centre of the Cell > Blog > Science Questions > Why does chicken pox get more dangerous as you get older?

Why does chicken pox get more dangerous as you get older? 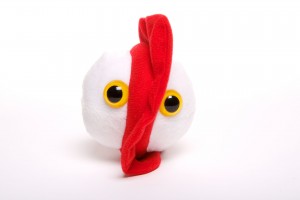 Back when you were small, you may remember getting itchy red spots all over your body, along with feeling a little bit tired and achy. You may also remember having to stay home from school! This is often what happens when a child gets chickenpox. The spots become blisters that last about 3 weeks. It is caused by a virus – which is a tiny living thing that causes diseases. Getting chicken pox as a child is actually quite a good thing! This is because it makes you produce special tags called antibodies that help your body target the virus and reduce your chances of getting infected as an adult.

However, in rare cases adults do get chickenpox and it can be life threatening. Adult cases can result in pneumonia (infection of the lungs), hepatitis (infection of the liver) and even encephalitis (infection of the brain). The reasons for adults having a nastier experience are not fully understood. It might be due to differences in their immune systems. This is the part of your body that uses those antibody tags to see where the virus is and attack it. There are two groups of immune system cells: innate cells and adaptive cells.

Think of the immune system like a big army defending against an invading disease. There are two sections to this army: the innate cells, which are like the foot soldiers, and the adaptive cells, which are like the cavalry. The job of the foot soldiers is to charge at whatever is in front of them in a battle. Innate cells have a similar role in the body, attacking anything that isn’t identified as part of the body ( some actually do this by eating their enemy!).

On the other hand, the cavalry is made up of highly trained knights, who might carefully target the important areas of the enemy army. Adaptive cells are specific in a similar way, learning how to attack the key bits of the invading disease really well by using antibodies to label viruses and bacteria, helping to stop the disease quickly. Adults have more of the adaptive cells while kids have more innate cells. Perhaps the foot soldiers are better at fighting chickenpox than the knights are! Scientists are still looking for the answer. 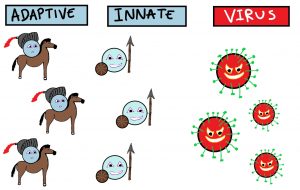 Some people – both grown ups and children – can have a poor immune system. This means that their body cannot fight infections well. This may be because the army of cells has too few soldiers – which happens when people are treated for cancer. It may also be because the immune cells are not very well trained, and attack the wrong things such as in type 1 diabetes. For these people, it’s important not to go near a child who is all spotty with chickenpox because they could get really unwell without the proper cells to defend themselves.

Chickenpox is mostly harmless, causing a bit of itchiness and feeling unwell. It only gets dangerous if you haven’t made antibodies from being infected as a child, or you have a condition that makes your immune system weaker. For lots of viruses there is something called vaccination that helps your body form antibodies before ever getting the disease. There is a vaccination available for chickenpox but it isn’t used much in the UK because the virus is so common that most people have antibodies anyway!